with contributions from Frederic B. James, Albert J. Lindsey

From a message to college studentsby the Reverend Frederic B. JamesThe Scarsdale Congregational ChurchScarsdale, New York(Reprinted by permission)

No shift in the current of men's lives has ever left men unchanged. Our singular concern is with the nature of the change. I have vivid recollections of my days in college just prior to the outbreak of World War II. days filled with uncertainties, questions, and irresolution. As a reserve officer in the United States Navy during the war I have experienced both the receiving and the sending ends of death-dealing weapons where death stands but a moment from life. And as the father of a young man in this same Navy, and of a daughter in college I can understand your concerns. 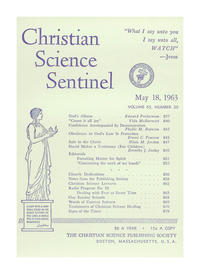