Several years ago when I was...

Several years ago when I was in Portugal I woke up feeling extremely ill. The symptoms were those of a very bad cold, accompanied with pain and feverishness. I decided to telegraph to a Christian Science practitioner in London; and though a cold and very violent wind was blowing, I decided to take the wire myself to the telegraph station because the postmistress did not understand English. My friends told me I was doing something quite suicidal since they believed I was suffering from influenza, but in two days I was well.

About two years ago I went to a strange hotel, and in the evening I asked the way to the television room. After following the directions quite correctly, as I thought, I found myself in darkness. I thought it was unusually dark, even for a television room, but that if I walked cautiously I would get to the correct place. 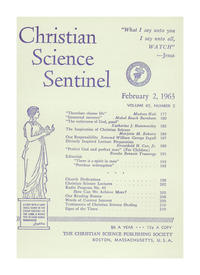