The blessings that have come to...

The blessings that have come to me through the study and application of Christian Science are so numerous that I feel I must express my gratitude for two of the specific instances of healing that have occurred in my life.

About six years ago, during my second pregnancy, I awoke one morning with an ache around my eyes. The pain became worse, and before two days had passed my entire face was so swollen I was almost unrecognizable. Finally I realized that I had been harboring a great deal of resentment toward a member of my family who I felt had done me an injustice. I set about replacing that feeling with one of love and compassion, and, after a few weeks, the swelling finally began to disappear. 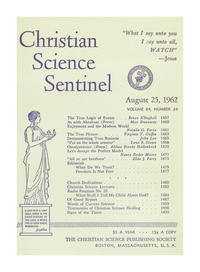