It is with joy that I testify to the...

It is with joy that I testify to the healing power of God in Christian Science. Six years ago the car in which I was traveling with three other people was involved in a head-on crash with an oncoming car, through no fault of our driver. Both cars were wrecked. I was a passenger in the front seat and caught the full impact of the crash. After we had been helped out of the car I lost consciousness, but regained it in time to prevent myself from being taken to the hospital in the ambulance which had been called.

At my request I was driven to a telephone where I called a Christian Science practitioner, two hundred and fifty miles away, who immediately began to pray for me. We were then driven home in the early hours of Sunday morning, and sincere gratitude was expressed by all for the protection we had been afforded.

Send a comment to the editors
NEXT IN THIS ISSUE
Testimony of Healing
Three years ago it was my privilege... 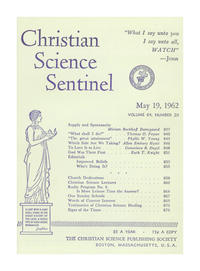