I was guided to Christian Science...

I was guided to Christian Science in 1929, at a time when I thirsted for a clearer understanding of God and His creation, man. Mine had always been a simple faith in God. I had no belief whatsoever in dogma or creed, and church services left me dissatisfied. In 1929 I left Sydney, Australia, where I was then residing, for a visit to the United States of America.

Traveling by train from San Francisco to New York, I soon found myself enjoying an interesting conversation with a pleasant American, who as a result of our discourse asked me if I was a Christian Scientist. I had to admit ignorance of the religion; then he proceeded to enlighten me sufficiently to whet my appetite for more knowledge of it. On my return journey to San Francisco some weeks later, I purchased my first copy of the textbook, Science and Health by Mrs. Eddy.

Send a comment to the editors
NEXT IN THIS ISSUE
Testimony of Healing
Immediately upon taking up... 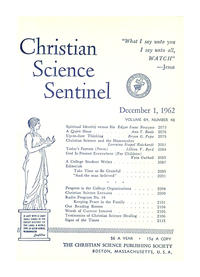