Originality is highly prized in many fields of human endeavor. New designs, new approaches, new methods, are always in demand, and so are those who can produce them. But originality is a quality which appears in two forms: the genuine and the counterfeit. Genuine originality is a quality of thought which has its origin in the limitless divine Mind. It is original because it proceeds directly from a true origin. The counterfeit has its origin in mortal mind, the belief of mind in matter.

Original thought is vital, immortal in nature. It flows directly from its infinite source, and to human consciousness it is newly formed. Material thought is lifeless, temporal in nature. It is not new. Since mortal mind is not really a source, its thought is but a rearrangement of accumulated borrowed mental images presented in such a way as to feign originality. 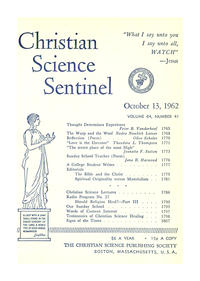