I am very grateful for the many...

I am very grateful for the many healings and blessings that Christian Science has brought to me and mine during the years. My wife and I became acquainted with it when one of our children was in need of healing. When he was about eight years of age, he was taken ill and was unable to walk. His illness was diagnosed as rheumatoid arthritis. He had four surgical operations, but the doctors in the hospital then told us that he would never walk again, and it was at this period that we turned to Science.

I had no knowledge of it at all, but my wife had had a copy of Science and Health by Mrs. Eddy given to her for a wedding present. However, the book had not been opened since she received it. My wife had expressed surprise at the nature of the gift, but the giver had stated that a time might come when we would turn to it, and how right she was!

Send a comment to the editors
NEXT IN THIS ISSUE
Testimony of Healing
I went skiing one weekend with... 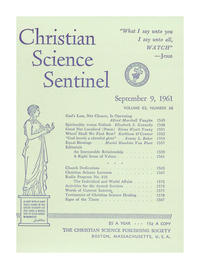