"Daily our Monitor is .... opening vistas of hitherto closed areas of thought"

The Christian Science Monitor has recently made a progressive step in more immediate communication throughout the world, and the impact of this is the close concern of us all. Not only has this step rendered the newsworthiness of the Monitor of greater value to mankind, but it is bringing about a universal service to humanity by virtue of the mission of the Monitor, a mission of which journalistic worth is only one of the many effects. The Monitor is leavening thought by reason of an irresistible impulsion implicit in its mission. After referring to the other periodicals, which she had named, Mrs. Eddy states in "The First Church of Christ, Scientist, and Miscellany" (p. 353): "The next I named Monitor, to spread undivided the Science that operates unspent. The object of the Monitor is to injure no man, but to bless all mankind."

Send a comment to the editors
NEXT IN THIS ISSUE
Article
"Is it lawful to heal?" 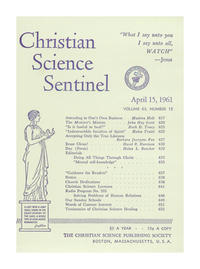