"The deep desire for Truth makes one receptive to its blessings"

Christ Jesus could discern spiritual receptivity in thought. Often the receptive individuals were in the multitude near him. Sometimes he called them to him or went to them. For instance, he called to him the woman in the synagogue who had been crippled for eighteen years and who "could in no wise lift up herself" (Luke 13:11), and said, "Woman, thou art loosed from thine infirmity." She was instantly healed. Unlike the unreceptive ones around her who were criticizing Jesus for healing on the Sabbath day, she had no hardness of heart. 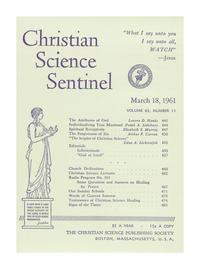