One often hears the lament, "If...

One often hears the lament, "If only I could live my life over again!" It is with boundless gratitude that I can testify that Christian Science has given me the opportunity to do so by opening the door to the one perfect way of Life. It has brought into my experience during the past twenty-two years a greater sense of peace, health, security, and a better relationship with my fellow men than I had ever known before.

My first healing in Christian Science was that of a condition which was thought to be hereditary. This took place during my youth and was brought about quickly. Thereafter I was drawn away from Christian Science to worldly, false attractions. This resulted in ill-health, confusion, and unhappiness. I began to suffer an obstruction in the nasal passage; this made breathing very difficult. I ate and slept little, and the discomfort was great. Influenced by my family, I resorted to medical treatment. The condition was diagnosed as a deviated septum, and surgery was performed. However, within a short period the trouble reappeared in a worse form, and I suffered from various allergies.

Send a comment to the editors
NEXT IN THIS ISSUE
Testimony of Healing
Many times I have voiced my... 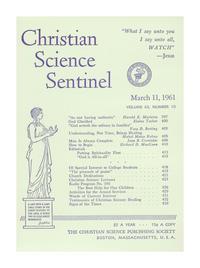