There can be no question but that the realm of Spirit, the kingdom of God, is governed by law, since it is evident that His kingdom has appeared to mankind only in the measure that His law has been grasped and obeyed. Moses received the Ten Commandments in terms that limit the action of material sense and bring human thought into accord with spiritual facts—the facts which Christian Science reveals to be the order or law of real being. Such basic facts include man's spiritual likeness to his creator, the inseparability of God and man, man's love for his Maker and his neighbor, God's changeless love for man, the creator's control of His creation.

Through the might of His love, God holds man forever in a state of obedience to His holy design. Humanity is slow to see this design, and even today, after many centuries, the moral law is needed to curb the physical senses and thus to purify them until they are put off through the scientific understanding that they are impostors—wolves in sheep's clothing— and no part of God's man. 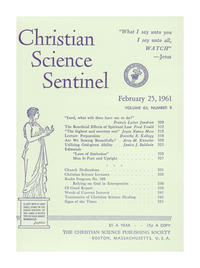