Some years ago, while attending...

Some years ago, while attending school in southern California, I became very ill. I had for some time been acquainted with Christian Science; so I insisted that no doctor be called. At first I tried to do my own prayerful metaphysical work, but I found it so hard to keep awake that I knew I had to have some help. I had been unable to speak or to swallow anything for almost a week.

A Christian Science practitioner was called at my request. She came at once to my bedside, read to me the current Lesson-Sermon from the Quarterly, and reassured me that Christian Science would heal me. When she left she asked my friends to call her if they felt it necessary.

Send a comment to the editors
NEXT IN THIS ISSUE
Testimony of Healing
"The earth shall be filled with... 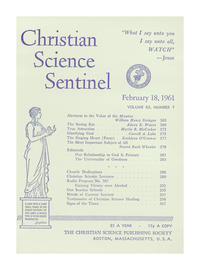