The Trustees under the will of Mary Baker Eddy have recently made available to the Field the Pocket Edition of Mrs. Eddy's Poems Including Christ and Christmas in blue and garnet genuine standard leather, priced at $7.00. The genuine morocco leather Pocket Edition of Poems may still be purchased in black and brown at $8.00. These books are sold in Christian Science Reading Rooms or will be sent postpaid by Charles Henry Gabriel, Publishers' Agent, One Norway Street, Boston 15, Massachusetts, U.S.A. 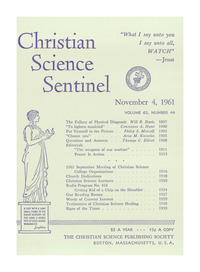