"Blessed are the merciful"

Jane was not quite old enough to attend kindergarten, but most of her friends did. Each day when they were in school Jane would play by herself, either outdoors or in the house. Usually she stayed near where her mother was busy with her duties.

All Jane's family, her mother and father and her brother, David, were Christian Scientists. Each Sunday, Jane and David attended the Christian Science Sunday School, where they learned many truths about themselves as children of God. 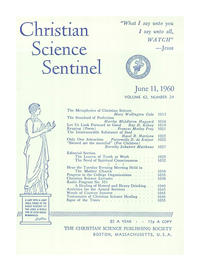