The healing power of Christian Science...

The healing power of Christian Science was proved to me when I had ear trouble. About three years ago one of my ears became stopped, and I supposed that water had temporarily lodged in it, which had sometimes happened after swimming, and that it would soon return to normal. However, this was not the case, and the ear stayed that way for a year or so. It was difficult at times to hear what people said, especially those testifying at the Wednesday evening testimony meetings in a branch Church of Christ, Scientist.

The constant study of the Bible and of Science and Health, together with the reading of the Christian Science periodicals, brought about a complete healing. One day while bathing, it occurred to me that I was usually careful not to saturate the affected ear, but catered to mortal belief by just passing a damp cloth over it. The thought came to me. Why am I treating this ear differently?

Send a comment to the editors
NEXT IN THIS ISSUE
Mrs. Eddy Mentioned Them
Herbert Spencer, 1820-1903 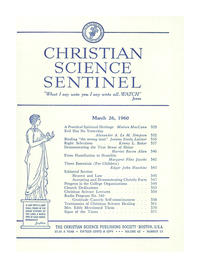