My mother was introduced to...

My mother was introduced to Christian Science in Scotland during my childhood. She was at that time a semi-invalid. A friend brought her a copy of the textbook, Science and Health by Mary Baker Eddy. As an earnest student of the Bible, my mother responded to the message of the textbook and quickly glimpsed something of the allness of God, good, and the perfection of man, made in Gods likeness. With continuing study she was lifted from ill-health and for over thirty years led a normal and an active life.

I was early taught to turn to the Bible and the textbook in any difficulties that arose. So-called childhood ailments considered contagious were quickly healed, and others around me were not infected. 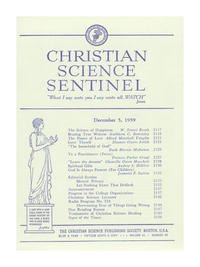