THE NOTHINGNESS OF EVIL

Christian Science startled the world when, less than a century ago, it declared the nothingness of evil. Evidently mankind had lost the meaning of the scientific estimate of evil which Christ Jesus gave when he said of the devil (John 8:44): "He was a murderer from the beginning, and abode not in the truth, because there is no truth in him. When he speaketh a lie, he speaketh of his own: for he is a liar, and the father of it."

Mary Baker Eddy says on page 108 of "Miscellaneous Writings," "Our Master, in his definition of Satan as a liar from the beginning, attested the absolute powerlessness—yea, nothingness,—of evil since a lie, being without foundation in fact, is merely a falsity; spiritually, literally, it is nothing." 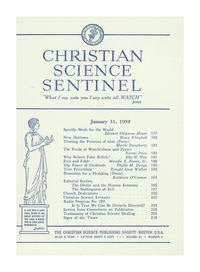