My first testimony appeared in...

My first testimony appeared in The Christian Science Journal of May, 1941, and I now feel that it is time for a further expression of gratitude for many blessings through the ensuing years. I am particularly grateful for the solving of a serious business problem.

I was a shareholder in a company in New Zealand that had begun to deteriorate so much that instead of its making a profit each year, substantial losses were accumulating to the extent of adding thousands to an overdraft at the bank. Naturally there were no dividends.

Send a comment to the editors
NEXT IN THIS ISSUE
Testimony of Healing
I am submitting this testimony... 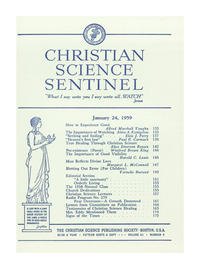