When I was a small boy, my mother decided to investigate Christian Science because of the ridicule she heard heaped upon it. From the public library of a Middle Western town, she procured a copy of "Science and Health with Key to the Scriptures" by Mary Baker Eddy. She was so impressed with the chapter entitled "Prayer" that she asked my father to read it. At the time he was home suffering from an attack of stomach trouble, which physicians had said was induced by cigar smoking.

After reading the chapter, he remarked that it was very good. Never after that in the forty more years of his experience here did he smoke a cigar. The stomach disorder disappeared completely and permanently.

Send a comment to the editors
NEXT IN THIS ISSUE
Testimony of Healing
Christian Science has meant so... 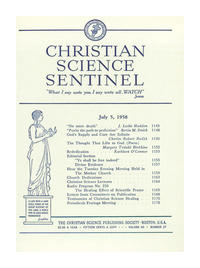