Mankind have long sought for security—something to depend upon. As long as this search is confined to some form of matter, such as possessions or location, it cannot be successful, for matter is subject to change without notice. True security is found only in the recognition and exercise of those spiritual qualities which are bestowed upon man by God, qualities which are forever unalterable.

It is in their religious beliefs that men have come closest to the realization of the security they so greatly desire. Although rituals may vary as much as do languages, religious peoples largely agree upon the worship of some power outside themselves, and, in general, this power or deity is thought to be eternal. 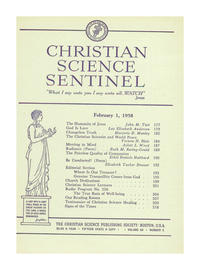