Note: Christian Science churches are dedicated only when free from debt.

Christian Science Society, Reigate and Redhill, at Gatton Point, Redhill, held dedicatory services on Sunday [May 6, 1956]. The society was recognized by The Mother Church in May, 1931. A group of students of Christian Science held services in their homes and later at the Colman Institute, Redhill, from the preceding January. In September, 1933, the society removed to rooms in the Market Hall, Redhill, and in October, 1952, a building at Gatton Point was purchased and remodeled as a church building. In October, 1955, it was freed from debt through contributions of friends and members of the society, and a grant from the Trustees under the Will of Mary Baker Eddy, which is gratefully acknowledged. A Sunday School has been maintained since 1929 and a Reading Room since 1933. Since the society has been at Gatton Point the Sunday School has been extended. 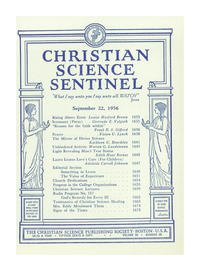