I am most grateful to bear witness...

I am most grateful to bear witness to the healing power of Truth. I began the study of Christian Science some twenty years ago. At that time I was in a deplorable condition, suffering from a nervous and physical breakdown with various complications, such as palpitation of the heart, inflammatory rheumatism, underweight, sleeplessness, and extreme fear. I was unable to do my housework and care for our young son. After becoming steadily worse, despite the care of doctors and chiropractors, as a last resort I began the study of Christian Science. At once I felt assurance that all would be well.

The physical ailments faded into nothingness in a very short time; but it took longer to cast out fearful and sickly thinking. I studied the Lesson-Sermons in the Christian Science Quarterly and read the periodicals. When physical weakness, despair, and fear would threaten to overwhelm me, just the help I needed would be found in the weekly Lesson-Sermon or in an article in the periodicals. Finally I gained "the peace of God, which passeth all understanding" (Phil. 4:7) and which I had feared I might never find. To learn that God is good and ever present was a great joy, and by clinging steadfastly to this truth, I was completely healed of the many fears and of the despondency which had held me in bondage. The statement in "Science and Health with Key to the Scriptures" by Mary Baker Eddy (p. 2), "Goodness attains the demonstration of Truth," enabled me to cast out resentment, criticism, bad temper, and the tendency to blame someone else for my trouble and fear.

Send a comment to the editors
NEXT IN THIS ISSUE
Testimony of Healing
Christian Science found me in... 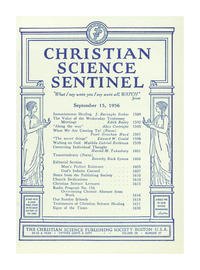