Through Christian Science my...

Through Christian Science my mother was healed of Bright's disease over fifty years ago after a doctor had said he could do no more for her. Her life for nearly forty years thereafter was a succession of triumphs over sickness and limitation. However, I did not turn wholeheartedly to this Truth until problems incident to the raising of my own family showed me the folly of ignoring God.

Even before I became an earnest student numerous healings were experienced when the truth was faithfully applied. One which especially stands out was that of croup, which had been greatly feared in my own childhood. When our oldest son was a baby he was subject to croup, and one night the evidence was quite frightening. After asking help from a practitioner, my wife and I studied "Science and Health with Key to the Scriptures" by Mary Baker Eddy far into the night.

Send a comment to the editors
NEXT IN THIS ISSUE
Testimony of Healing
I wish to express gratitude to God... 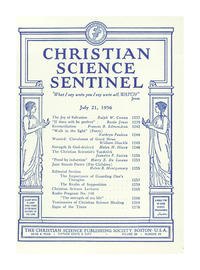