One Saturday morning I drove...

One Saturday morning I drove out of the garage and then locked the garage door. When I turned I saw the car rolling slowly down the lane towards the street. I ran to the car, opened the door, and reached for the emergency brake. The next thing I knew I was being held tightly against a telephone pole by the weight of the car, and I could not move. It looked like a critical situation. My body was half in the car, and my feet were on the ground. I was frightened, and I touched the horn. Then I realized that I did not want to rouse my mother, because the sight might frighten her.

A remarkable testimony that had appeared in the Sentinel came to my thought. It was given by a man who through reliance on God had made his escape from the fuel tank of a ship in which he had imprisoned himself while at work. The thought then came to me that one could find himself in no situation where God could not help him.

Send a comment to the editors
NEXT IN THIS ISSUE
Mrs. Eddy Mentioned Them
Dr. Oliver Wendall Holmes, 1809-1894 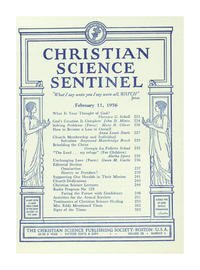