There is a spiritual, true standard for both good citizenship and good government. That standard is founded on love—the love that is shown forth through obedience to the two great commandments (Ex. 20:3), "Thou shalt have no other gods before me," and (Matt. 22:39), "Thou shalt love thy neighbour as thyself."

If one loves God supremely, he has true devotion and loyalty to that which is Godlike and a clear discernment of the need to pray daily for right or righteous government to be manifested. Moses proved God's government. His love for God enabled him to guide a people for forty years through a very hard period in their history. It was only when they were disobedient that they had difficulties. Every need of the people was met when they obeyed the laws of God. Manna came from heaven, water flowed from a rock, and a dry path opened through a sea to make a way of escape from their enemies.

We learn truly to love our neighbor as we recognize that all men are actually the sons of God. Through the understanding of this fact, we learn to manifest the highest concept of good citizenship and right government. Love for one's fellow men was understood very clearly by Christ Jesus. He knew that the real spiritual man is immortal; that the divine law of infinite Love is supreme and all-powerful. And he shared the fruits of his obedience to this law with mankind.

Mary Baker Eddy says (The First Church of Christ, Scientist, and Miscellany, p. 189), "The government of divine Love derives its omnipotence from the love it creates in the heart of man; for love is alle-giant, and there is no loyalty apart from love." Mrs. Eddy expressed a high concept of citizenship and government. She included all the world in her love. Her writings are full of counsel to all Christian Scientists to do likewise.

Our Leader reminds us constantly that Christ Jesus is the Way-shower. Following the example of the Master, we see our neighbor's real selfhood as God's spiritual, perfect man. Our understanding of divine Science enables us to separate that which is true from that which is false, thus to love all. As we understand that error has no reality and is no part of God's man, we find that we cannot be tricked into doing anything to the detriment of our country, either as an average citizen or as an officeholder. Paul wrote (Rom. 13:10, 12): "Love worketh no ill to his neighbour: therefore love is the fulfilling of the law. ... The night is far spent, the day is at hand: let us therefore cast off the works of darkness, and let us put on the armour of light."

During Daniel's time, the attempt was made to outline how he and certain others of the children of Israel should think, worship, and even what they should eat. Because Daniel stood firm in his love for God and had no resentment toward his so-called enemies, the vengeance of hatred could not destroy him. He was safe even in the lions' den. When the power of the true God, whom he worshiped, was seen, he was given the opportunity for larger activity in the government. Also, as a result of his example, the king turned to the one true God. He said (Dan. 4:37), "Now I Nebuchadnezzar praise and extol and honour the King of heaven, all whose works are truth, and his ways judgment."

Mrs. Eddy writes (Message to The Mother Church for 1900, p. 10): "Certain elements in human nature would undermine the civic, social, and religious rights and laws of nations and peoples, striking at liberty, human rights, and self-government—and this, too, in the name of God, justice, and humanity! These elements assail even the new-old doctrines of the prophets and of Jesus and his disciples." She continues a little farther on, "Here our hope anchors in God who reigns, and justice and judgment are the habitation of His throne forever."

Man's identity as a son of God is distinctly individual and cannot be submerged into molded, material thought patterns. We must know that the spiritual progress of men and nations cannot be retarded by fear, suspicion, distrust, and hatred.

Two important political conventions were held in a midwestern city of the United States one summer. A Christian Scientist was led to add her prayers to those of countless others. She knew that God, good, alone governs; that His love is not divided according to parties, nor is it swayed by political expediency; that infinite Mind is reflected by the real man under all circumstances.

This student of Christian Science followed the meetings over the radio. On one occasion toward morning, there was evidence of intense discord and chaos. A climax of confusion seemed to be reached when a fire started from a carelessly discarded cigarette. Soon after the fire was put out, an unusual thing occurred. The acting chairman said: "Ladies and gentlemen of the convention, we are about to embark on the most serious portion of our convention. It is fitting at this time that we pause and ask divine guidance. I am therefore asking [a soloist] to sing the 'Lord's Prayer.' "

As this student listened intently, all the noises from that vast throng died down into stillness while the "Lord's Prayer" was sung. Then immediately after that a delegate made a motion for adjournment, which was passed. The next day, in a calmer, more harmonious atmosphere, business was continued, the business of nominating a candidate for the office of president of the United States.

Mrs. Eddy says (Miscellaneous Writings, p. 12): "In Christian Science, the law of Love rejoices the heart; and Love is Life and Truth. Whatever manifests aught else in its effects upon mankind, demonstrably is not Love. We should measure our love for God by our love for man; and our sense of Science will be measured by our obedience to God,—fulfilling the law of Love, doing good to all; imparting, so far as we reflect them, Truth, Life, and Love to all within the radius of our atmosphere of thought."

The law of Love is the only real power. When understood and rightly applied, it heals all individuals and brings to light true government. 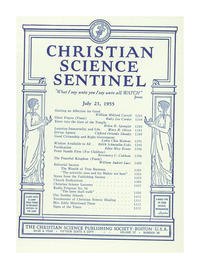