Within two months after I had...

Within two months after I had begun the study of Christian Science I was healed of constipation and of periodic discomfort. At the same time social drinking and smoking, the latter a habit of twenty years' standing, were overcome. Some time after that I was healed of chicken pox in two days, of influenza in one day, and of a badly injured foot in a short time. Naturally I was very grateful for these healings and wished to share them at a Wednesday evening testimony meeting. But the church I attended was a large branch church, and month after month passed without my being able to rise and openly express my gratitude for Christian Science.

Error kept me chained to my scat with these various suggestions: that I could not possibly have anything to say which would be helpful to anyone; that I never had been able to speak in public; that I did not like to have people looking at me; and that I would be sure to become confused and forget what I wanted to say. However, Mrs. Eddy says in the Manual of The Mother Church (Art. VIII, Sect. 24), "Testimony in regard to the healing of the sick is highly important" And I knew that obedience to the Manual is of primary importance to every church member. In regard to obedience, Mrs. Eddy says in "Miscellaneous Writings" (pp. 116, 117), "If in one instance obedience be lacking, you lose the scientific rule and its reward: namely, to be made 'ruler over many things' " 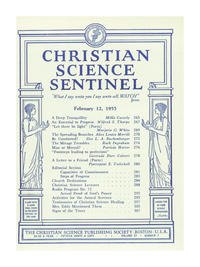