In a rural community where two Protestant churches were located the attendants were instructed to synchronize the bell ringing so that one bell would chime and then pause and wait for the first tone of the other. Then the first would ring again, followed by the second, continuing until the end of the call to church. Since they were associated often with shady trees and the caressing tones of the turtledove floating out upon the Sabbath stillness, these two bells, not particularly musical when rung separately, became the symbols of co-operation when united, building into the youthful thought of the writer a great reverence for church.

Grateful indeed may one be whose early training has taught him love of church, for with it go the building of character and respect for law and order. Such foundation, well laid, provides a basis for the erection of a superstructure of love for one's fellow men without which Christianity loses its meaning. The world often thinks of church as a human organization made up of widely varying personalities, using the same ritual and ceremony, and uniting in an attempt to reach the divine. Spiritual discernment reveals that the real Church is an idea of God. Mary Baker Eddy saw this truth and gave it to the world in her Soul-inspired definition of "Church" found in "Science and Health with Key to the Scriptures," which reads in part (p. 583): "The structure of Truth and Love; whatever rests upon and proceeds from divine Principle."

Send a comment to the editors
NEXT IN THIS ISSUE
Article
CONSTANT, CONSECRATED EFFORT 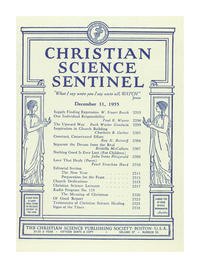