"STUDY TO BE QUIET"

In the eighteenth chapter of Genesis there is related a beautiful incident in which God revealed to Abraham His purpose. It was "in the heat of the day" when in quiet meditation Abraham sat in the door of his tent. Three angels appeared to him, one of whom seemed to be identified with God. The record reads that in the quietness of these moments God told Abraham that his wife, Sarah, would give birth to a child in her old age, as He had promised, and thus assure the continuity of his family.

The voice of God is heard by all who listen for it and who prepare themselves for its pure messages of love, inspiration, and guidance. Our Leader, Mary Baker Eddy, turned often to divine Love in quiet meekness and expectation and received glorious messages which enabled her to establish her Church on a firm foundation of Truth. Referring to her discovery of Christian Science, Mrs. Eddy writes (Science and Health with Key to the Scriptures, p. 224): "A higher and more practical Christianity, demonstrating justice and meeting the needs of mortals in sickness and in health, stands at the door of this age, knocking for admission. Will you open or close the door upon this angel visitant, who cometh in the quiet of meekness, as he came of old to the patriarch at noonday?" 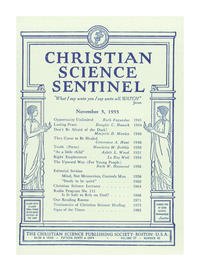