Twelve years ago Christian Science was presented to me by a friend when I expressed fear that I would have a heart attack. There was much fear to be overcome, for I had already had one attack, and a physician had told me when I was a child that I had leakage of the heart, I was given two copies of The Christian Science journal, but as I objected to what I thought Christian Science was, I did not plan to read them.

However, one day our son, who was four, became ill and had a fever; so I decided to read the literature and see if there was any truth in it. What I read seemed almost like a foreign language, but the child fell asleep, and when he awakened he was well. I was grateful, for previously on such occasions he had had to remain in bed several days.

Send a comment to the editors
NEXT IN THIS ISSUE
Testimony of Healing
I wish to express my sincere gratitude... 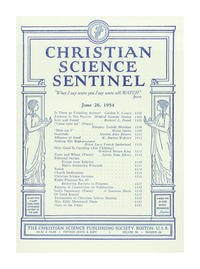