True prophecy is the discernment of ever-present perfection. It is based on spiritual sense, with which men behold and accept divine facts as true, despite false material evidence. True prophecy delays not its good to mankind and limits not its beneficent accomplishments. Time is not a requirement for the fulfillment of true prophecy. Revelation is true prophecy.

Mary Baker Eddy thus defines "prophet" in her textbook, "Science and Health with Key to the Scriptures" (p. 593): "A spiritual seer; disappearance of material sense before the conscious facts of spiritual Truth." And one dictionary includes among its definitions "one who speaks for another, esp. for God; an inspired revealer, interpreter." A true prophet is not, then, one who predicts the future alone, but one who through spiritual intuition interprets God's universe aright and acknowledges the ever-present facts of being, forever unchangeable and unerring. "That which hath been is now," states the Preacher (Eccl. 3:15), "and that which is to be hath already been." Thus man's pre-existence as God's beloved child remains perpetual and uninterrupted throughout eternity. His timeless and ageless existence is forever one with his Maker God. 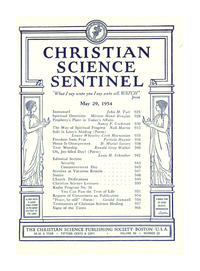