Before I became interested in Christian Science I was suffering from a nervous breakdown and from a broken finger that had developed gangrene, for which I had been told an amputation was necessary. I made up my mind not to undergo this operation, however, for I thought, If God is omnipotent, He can heal my finger; what is gangrene to Him?

Turning to God with all my heart, I received much inspiration. For a long time I had been desirous of reading the Bible but had not taken the time to do so. As I was now unable to work, I had plenty of time, and I became very much interested in reading this great book. I was living alone, so there was no one to insist upon my undergoing the operation. Within three weeks my finger was free from the gangrene, although I was still unable to use it in my work as a typist. 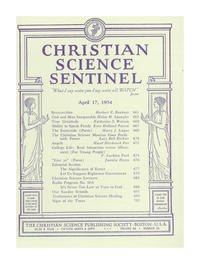