"I WILL LIFT UP MINE EYES UNTO THE HILLS"

The words of the one hundred and twenty-first Psalm point to the spiritual truth of God's power and love, supreme and unfailing. Thus does the Psalmist begin his song of prayer and praise: "I will lift up mine eyes unto the hills, from whence cometh my help." How well do the hills symbolize the strength, the permanency, the eternality, of the divine Principle of all being! The Psalmist then prays the prayer of spiritual realization, affirming that God is the only creator; that He will keep His people; that He will preserve them from all evil; that He will guide their footsteps forever.

The Psalmist realized that by lifting his thought above the mists of mortal thinking he would find in his higher altitude of thought the help he needed. That which impelled him to make the ascent mentally into these hills of spiritual vision was the same spiritual desire which impelled Moses to ascend Horeb's heights—a desire which constituted prayer in its highest sense. It was on the summit of Mount Horeb that Moses received the revelation of God as the great I am; and later, on Mount Sinai, he heard the voice of God and transcribed upon tables of stone the divine message given in the Ten Commandments. 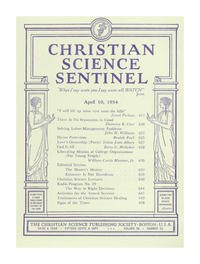