Finite concepts of time, which accompany a belief in the reality of matter, would hold mankind with rigid fetters. The stages of birth, growth, and decay for animal and vegetable life are assumed to take place over an average period of years. Distances require a certain amount of time to be traversed. Seasons endure for a specified number of months. Indeed, all of material existence is bound up with the clock and the calendar.

Physical science and invention are partially reducing some of these shackles by mechanical means, but they have not succeeded in liberating men their influence. The prevalence of this universal belief in time is indicated by the manner in which human beings speculate with helpless frustration on future events, dwell in thought and conversation on past occurrences, and sometimes concern themselves more about things remote than things at hand. 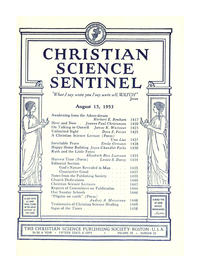