About two years ago I reached...

About two years ago I reached a dead end in my religious and philosophical thinking. I had a license to preach in an orthodox church, but I definitely needed to be more spiritually-minded and to be able to help others with their problems. There seemed to be so many unanswered and unanswerable questions, such as, Why are there economic inequities, sin, sickness, suffering, and death? It was only after I started learning the truth in Christian Science that I became satisfied that there is an answer to these problems.

The smoking and social drinking habits completely left me after two months' study of Christian Science. I promptly threw away all drugs and material preparations, knowing that I could completely rely on God for all healings. Formerly I had believed that coffee was a morning necessity and had been mesmerized by the mortal sophistication that everyone is a pessimist until after breakfast. I discontinued the use of coffee when I learned that man is a joyous reflection of God and is not dependent on coffee to make him happy or contented.

Send a comment to the editors
NEXT IN THIS ISSUE
Testimony of Healing
"If men understood their real... 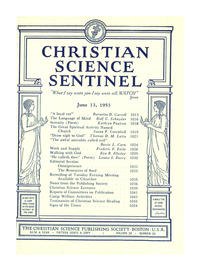