In her textbook, "Science and Health with Key to the Scriptures," Mary Baker Eddy, the Discoverer and Founder of Christian Science, refers to modern Pharaohs who today, as in the time of Moses, hold men enslaved to the beliefs of material sense. Thousands upon thousands are aware that they seem to be in bondage to evil habits and are groping in the darkness for light and freedom. To such, Christian Science brings the beneficent message of the Christ. In the words of Isaiah (61:1) it proclaims "liberty to the captives, and the opening of the prison to them that are bound."

Those who, because of Christian Science, live in a moral atmosphere of freedom from false appetites are perhaps unaware of the hold that strong drink and other vices claim to have on mankind. It is well to understand this more clearly, for the liberating thought of every scientific thinker can help in freeing the human race from the imposed bondage which so-called mortal mind has placed upon it. The writer of Proverbs declared (20:1), "Wine is a mocker, strong drink is raging: and whosoever is deceived thereby is not wise." 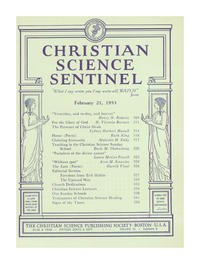