Early in my study of Christian Science...

Early in my study of Christian Science I was saved from drowning by realizing something of the truth stated in "the scientific statement of being," given on page 468 of the Christian Science textbook, "Science and Health with Key to the Scriptures" by Mary Baker Eddy. At another time I was healed of badly torn ligaments of the hip by reading Science and Health for four hours. 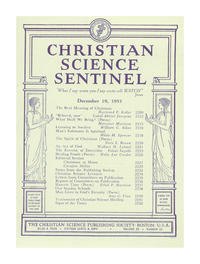