"THE FAITH WHICH IS BY HIM"

The Bible records that the disciple Peter, accompanied by John, found at one of the gates leading to the temple a man who hail been lame from birth, and he healed him. At once the people gathered around them, amazed and questioning.

Peter patiently told them that the healing had not been brought about by human means or in some unknown material manner, but by the same Christ-power that they had so lately denied in Jesus' works. He explained (Acts 3:16), "His name through faith in his name hath made this man strong, whom ye see and know." Peter considered the essence of his statement so vital that he repeated, "Yea, the faith which is by him hath given him this perfect soundness in the presence of you all." 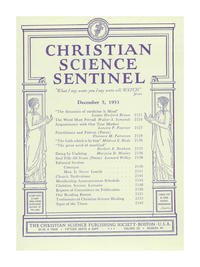