This testimony is written in gratitude...

This testimony is written in gratitude to Christian Science and with the special hope of giving encouragement to those who have suffered for a long period of time.

In 1942 I developed a severe case of stomach ulcers, as well as a condition of athlete's foot which became so aggravated that it spread all over my body. I will not dwell on the agonies I endured. These conditions continued during the period of World War II, getting progressively worse. But as I held a responsible position, I remained at my post until after the war ended, and then in February, 1946, I quit my position.

Send a comment to the editors
NEXT IN THIS ISSUE
Testimony of Healing
I should like to relate a healing... 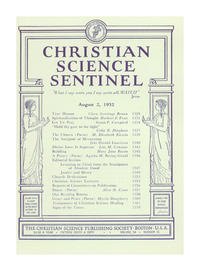