Over thirty years of proving the...

Over thirty years of proving the teachings of Christian Science have convinced me that its application to any problem brings positive results. I have had numerous physical healings, and many bad habits and undesirable traits of character have been overcome.

During these years my wife and I have raised four boys to manhood and have never been tempted to resort to material remedies. Various diseases, including scarlet fever and diphtheria, were healed. Our two younger sons spent two or three years overseas during World War II. They have testified to being protected and guided through applying their understanding of God, which they obtained at home and in the Christian Science Sunday School. One of my greatest causes for joy and satisfaction is seeing the understanding of Truth taking root in the consciousness of many of our grandchildren and being put into practice by them. 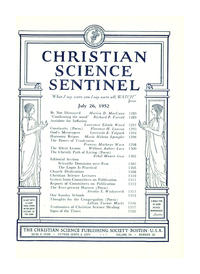