Soon after commencing the study...

Soon after commencing the study of Christian Science I realized that I had found the truth concerning Life. Many questions which I had previously found unanswerable the teachings of this Science answered to my complete satisfaction. The Bible, which at times had seemed contradictory, took on new meaning for me. I have found that through Christian Science each time we study even the most familiar story of the Bible we get a richer and fuller message.

I am profoundly grateful for the health and happiness which I have experienced since I became interested in Christian Science over twenty years ago. At that time I had been unable to work for nine months because of rheumatic fever and its aftereffects. The doctor told me that as a result of an illness in childhood I also had a heart condition which had become serious.

Send a comment to the editors
NEXT IN THIS ISSUE
Testimony of Healing
I have had much help and satisfaction... 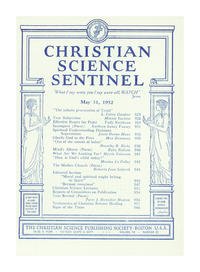