It was shortly before World War...

It was shortly before World War II that my mother, sister, and I became interested in Christian Science and later joined The Mother Church. Since then we have been protected and blessed, and life has been more joyous than ever before. With a grateful heart I should like to tell of some of my experiences.

In April, 1942, a tornado struck our home town. At the time I was in the store which my father operated, watching the hail and rain and the effects of the unbelievably strong wind. The terrific force of the storm broke the plate-glass show windows, and as I fled to the rear of the building part of it collapsed. Some of the debris struck me on top of the head, and I started to scramble for cover under a nearby table; but remembering that God was my protector, I stopped immediately. Although the rain was coming down in sheets, the debris ceased falling. I know that God protected me, and I cannot tell in words how grateful I am for that protection. The head injury was quickly healed in Christian Science.

Send a comment to the editors
NEXT IN THIS ISSUE
Testimony of Healing
From 1920 to 1939 I had great... 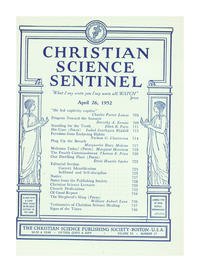