I should like to testify to God's great goodness as proved through the teachings of Christian Science.

My parents became interested in Christian Science when one of my younger sisters was suffering from a disease pronounced incurable by our family physician, who gave her only a few months to live. A neighbor recommended that my parents ask a Christian Science practitioner for help, and they did so. The difficulty was soon met, and over a period of several years undesirable traits of character with which my sister had been hampered since birth gradually fell away, and she became a new person. My parents became sincere students of this Science, and we children were enrolled in the Sunday School. I am deeply grateful for this experience, for the training was a firm foundation, which is ever with me.

Send a comment to the editors
NEXT IN THIS ISSUE
Testimony of Healing
From early girlhood I had been... 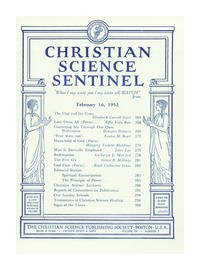