Before I was eight years of age my...

Before I was eight years of age my mother had undergone two operations; the doctors said another one was necessary, but because of her weakened condition they were afraid she would not survive it. At this very dark hour a neighbor presented Christian Science to my mother. I shall never forget the change that came over our home; my mother started eating normally again, and within a very short while she was completely healed. My brother and I were enrolled in a Christian Science Sunday School, and there my love for this religion was implanted.

As I grew into young womanhood, I neglected my study of Christian Science and started seeking happiness through material means. I married and later became so fearful in trying to bring up our child that I knew I needed and wanted Christian Science help. I began an earnest study of Science; gradually my fears for the child disappeared, and all of us were benefited.

Send a comment to the editors
NEXT IN THIS ISSUE
Testimony of Healing
In 1946 I was stricken with what... 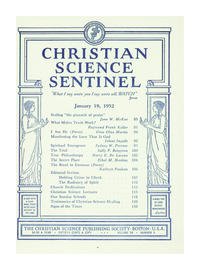