In June, 1948, after several medical examinations were made and X rays taken, I was told by the doctor that he was much concerned about my condition, but that he could do nothing for me. I was suffering from advanced hydronephrosis, and since I had already had a kidney removed, an operation was out of the question.

The doctor confined me to my bed and advised temporary medical remedies. In order to alleviate attacks of the disease morphine injections were given me. As these attacks continued, I became constantly weaker; but despite this, I wanted to live, and I was not discouraged. It was then I remembered that there was such a thing as Christian Science and that it healed. I called a Christian Science practitioner and asked for treatment. Help was most lovingly given. The healing was not immediate, but I improved by degrees.

Send a comment to the editors
NEXT IN THIS ISSUE
Testimony of Healing
Gratitude for the many blessings... 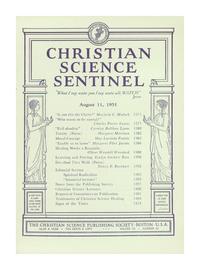