Christian Science has abundantly blessed my family for many years. While listening to a Christian Science lecture, my husband was instantaneously healed of astigmatism, which had caused severe headaches and the need of wearing glasses. Our two boys have been wonderfully protected from accidents and so-called children's diseases. I have been healed of scarlet fever, a tendency to take cold easily, influenza, and nervous exhaustion. While we have had many physical healings, the following one stands out as a constant source of inspiration and as proof that Christian Science heals.

One day as I was putting our year-old baby to bed for his afternoon nap, he was suddenly taken with convulsions. I was alone with the child and was terrified at the symptoms which confronted me. The attack was so severe that in a few minutes he was unconscious, and the suggestion came that he was passing on. Then, in the words of the Psalmist (Ps. 77:1), "I cried unto God with my voice,... and he gave ear unto me." I recalled having seen the words, "God is my life," in Mrs. Eddy's handwriting (Mary Baker Eddy: A Life Size Portrait, by Lyman P. Powell), and each time the suggestion came that it was no use, that the child was gone, I declared that God was his life, until I was fairly shouting it. 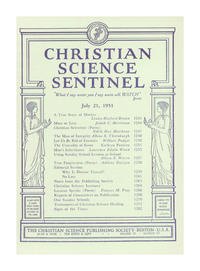