Although my mother became a...

Although my mother became a Christian Scientist when I was quite small and Christian Science literature was always in our home, I did not take up the earnest study of this Science until after a problem which could not be solved by any other means presented itself. During that time divine Love was gently leading the way, and I was able to get a college education, a thing which to material sense would have seemed almost impossible.

However, I had a series of inharmonious experiences in college and suddenly awakened one morning to realize that I had drifted away from Christian Science. During this period of several months animal magnetism with all its snares had been at work. Finally a problem of unpleasant human relationship and intense emotional disturbance presented itself, and it seemed almost unbearable.

Send a comment to the editors
NEXT IN THIS ISSUE
Testimony of Healing
It is a blessing to me to have had... 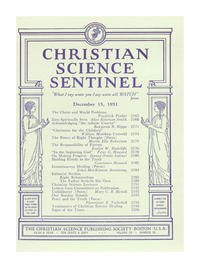