Many indeed are the blessings I...

Many indeed are the blessings I have received since I have been a student of Christian Science. When I first began the study of this Science, I was desirous of conducting my business according to its teachings. I had what the world would call a comfortable fortune, but everything seemed to go wrong, and in a few short years my material possessions were depleted. As far as I could see, the situation seemed hopeless. However, the Biblical reference to Elijah and the widowed woman was included in the Lesson-Sermon in the Christian Science Quarterly about that time, It gave me a message of hope, and renewed efforts were made to conform to the will of God. I soon found an opportunity to be of service to a fellow man, and in attempting to assist him I found employment.

This broke the seeming mesmerism, and in a few years I was enabled to join some others in launching a business that was prosperous from the start. However, I still had some proving to do, for in a very short time I was out of employment again.

Send a comment to the editors
NEXT IN THIS ISSUE
Testimony of Healing
Except ye see signs and wonders,... 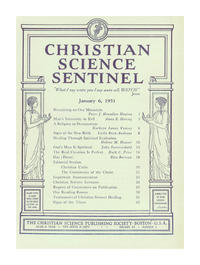