WHAT a wealth of hope, tenderness, and compassion lies enfolded in the thought of forgiveness. There is probably no human heart, however seemingly sunk in selfish wrongdoing, that does not have its longing for a forgiveness that would wipe out the unlovely picture of the past and allow a fresh, unsullied start.

The world, as it has with most things, has many differing concepts of forgiveness. Some seek forgiveness from an unknown, undefined God, with little assurance of His disposition to grant it. Others seek it from those who, because they believe themselves to have been unpardonably wronged, often seem unwilling and unable to bestow it. It is sought at a price by those who believe it can be bought and who thus, in a false sense of security, fall an easy prey to the temptation to repeat the offense. 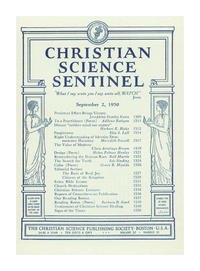