Mary Baker Eddy foresaw the ultimate victory of mankind over the mesmeric false beliefs that have subjected them to bondage. She prophetically says in "Science and Health with Key to the Scriptures" (p. 531): "The human mind will sometime rise above all material and physical sense, exchanging it for spiritual perception, and exchanging human concepts for the divine consciousness. Then man will recognize his God-given dominion and being."

What a joyous privilege it is to learn of man and his relation to God through the study of the Scriptures in conjunction with Science and Health! This study removes the mystery and does away with speculative theories that are rife where a lack of spiritual understanding exists. "Finite sense has no true appreciation of infinite Principle, God, or of His infinite image or reflection, man," writes our Leader (ibid., p. 300). Because finite sense has no Principle, no standard of its own, by which to reckon values, its valuation and appreciation are arrived at by comparison in its own realm of thought. Conclusions thus drawn are faulty, and neither man's worth, status, ability, nor accomplishments can be properly estimated or appreciated by this method. 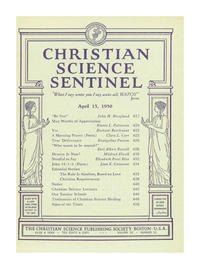