The Very Rev. John B. Walthour in a radio address on the Episcopal Hour produced by the National Council of the Protestant Episcopal Church

"Thy will he done." Those words are the greatest of all words. ... And when we seek instruction in the meaning of God's will, where better could we seek than in the life and teaching of Jesus? ... He lived his entire earthly life in utter devotion to the will of God.... We read of his saying: "I must work the works of him that sent me." "I seek ... the will of the Father which hath sent me." "It is not the will of your Father which is in heaven that ...." And he who has watched Jesus as he lived, moved, and spoke in the world of men has seen the will of God in action. 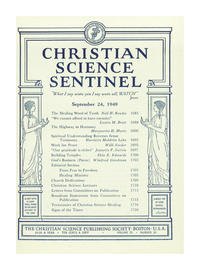